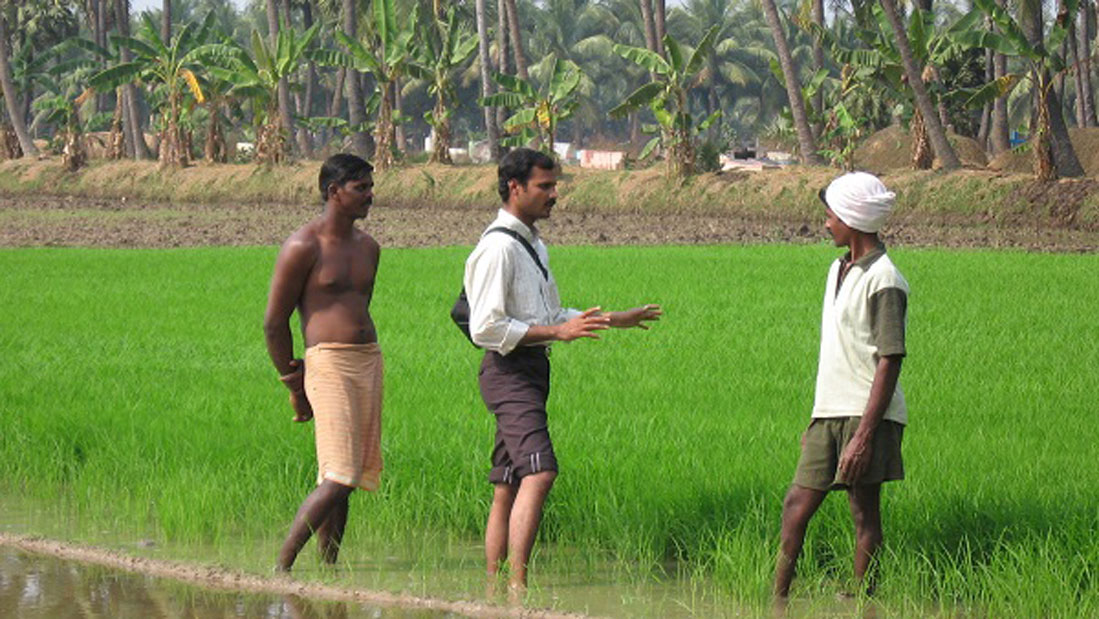 Posted at 02:29h in Blog by Suman Biswas 0 Comments

The world’s population reached 6 billion people in 1999 and is expected to reach 8.5 billion by 2025. This population trajectory means that from now to 2030, the world will need to build the equivalent of a city of 1 million people every five days in developing countries.

Close to one trillion people in the world do not have sufficient food for a healthy and active life. Therefore, going forward, farmers must necessarily produce more food per unit of land. However, in order to do so, they simply cannot keep producing in the same ways. They will need to do so while facing climate change, volatility, shifting nutrition needs and increasing scarcity of most of the physical factors of production.

Agriculture has changed dramatically, especially since World War II. The production of food and fiber crops and animal products has increased markedly due to new farming technologies, including new high-yield varieties of crops, mechanisation, and the increased application of pesticides and fertilizers. Government policies have also encouraged farmers to maximize production. These changes have allowed fewer farmers to produce the majority of the world’s agricultural crops.

Although these changes have had many positive effects and reduced many risks in farming, there have unfortunately also led to significant cost such as the clearing of native vegetation, soil erosion, the decline in soil fertility, groundwater contamination, increasing costs of production and declining returns on family farms, and the closing of services in rural communities. In many cases, these changes have forced small farmers to leave the land and move to urban areas.   Thus, agriculture is at the threshold of a necessary paradigm shift.

The sustainable agriculture movement has grown in the past decade as a solution to the environmental and social problems caused by conventional agricultural systems and practices.

Agriculture is sustainable when it leads to long-term:

– Improvements in the quality of life of farming families;

– Vitality of rural communities, villages and small towns; and

– Protection and conservation of the natural environment, especially soil, air and water.

This means that a holistic approach to agriculture would recognize the linkages between the soil, vegetation, air and water and the way that these both influence, and are influenced by, the farmer’s beliefs, perceptions, ambitions, skills and knowledge, and the social, economic, cultural, and political systems in which the farm operates.

And India, with our much greater national dependence on agriculture industry, our much smaller scale farms and very low levels of literacy and numeracy and technical knowledge, this becomes even more critical.

In addition to the early market innovation example of ITC IBD’s E-Chaupal model that provides agri-business with an e-solution that began with conceiving an alternative supply chain management model to having to dealing with fragmented farms, infrastructure bottlenecks and numerous intermediaries to providing a click and mortar model in the form of a kiosk with real-time information on the latest weather report, prices in various mandis, global prices and the best farming practices to even services such as soil testing, seed and fertilizer delivery and access being offered. The company’s target is to eventually have 50,000 choupals to cover 200,000 Indian villages, which means covering one fifth of the country.

Another example is that of Barefoot Lightning, which is focused on empowering farmers and rural communities in developing countries through knowledge, based on deep scientific understanding.

Barefoot Lightning works with a variety of Farmers Groups, NGO’s, Agribusinesses and Food Processors within India to understand how to drive significant transformative impact across the entire value chain using a combination of mobile and tablet based decision support systems for farmers and field extension workers.  These allow farmers of very low to zero literacy levels to learn deep insights into their agriculture system through an audio-visual interface.

In the developed and even some developing countries, farms in urban areas are also becoming increasingly prevalent, providing food for high population areas (and often low-income areas), beautifying communities and bringing people together to work with their neighbours.

In the United States, for instance, the City Slicker Farms in Oakland is to empower community members to meet the immediate and basic need for healthy organic food for themselves and their families by creating high-yield urban farms and backyard gardens. It takes vacant or underutilized land and transforms it into market farms.

In Yorkshire, United Kingdom, there is Rooftop Farming and Lifestock Management that makes efficient use of scarce urban space and also have a positive environmental impact; in addition to providing extra insulation for buildings (which reduces energy use for heating and cooling. Rooftop farms capture precipitation. This helps reduce storm water run-off, which can overwhelm sewage treatment facilities and pollute waterways during heavy storms.

And lastly, honey is sold at the Union Square Greenmarket in New York City, by beekeeper Andrew Cote who keeps bees on rooftops, balconies and community gardens in Manhattan, Brooklyn.   Keeping the above in perspective, a clear path to sustainable agriculture would be to combine the elements of national economy such as institutions, human capital, infrastructure, market linkages and business sophistication to the actual evidence of innovation outputs such as knowledge and technology outputs and creative outputs. We would need to:

2) Significantly reduce waste along the entire food chain (currently at 49%!)

5) Motivate and reward investments and business systems that result in measurable impacts to the public good.

6) And lastly, define the goal in terms of human nutrition rather than just more production.

Ennovent Pool member Akanksha Pundir is a dynamic and results-oriented marketing communications and innovation management professional with 18 years of experience in business development, marketing and consulting. To access Akanksha’s expertise, write to aparna.bhat@ennovent.com

No, thanks!
We use cookies to ensure that we give you the best experience on our website. If you continue to use this site we will assume that you are happy with it.Ok